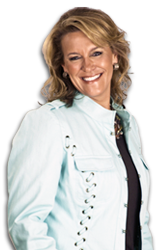 Loral Langemeier is a money expert, sought after speaker, entrepreneurial thought leader, and best-selling author of five books who is on a relentless mission to change the conversation about money and empower people around the world to become millionaires.
The CEO and Founder of Live Out Loud, Inc. – a multinational organization — Loral shares her best advice without hesitation or apology. What sets her apart from other wealth experts is her innate ability to hone in on the skills and talents of everyday people to inspire them to generate wealth. She has created, nurtured, and perfected a 3-5 year strategy to make millions for the “Average Jill and Joe.” To date, the company has served thousands of individuals worldwide and created hundreds of millionaires through wealth building education keynotes, workshops, products, events, programs, and coaching services.
Luminaries including Bob Proctor, John Gray, Jay Conrad Levinson, and Michael Gerber are powerful champions of her work. T. Harv Ecker says,

“Loral Langemeier’s investment strategies make millionaires – and the best thing is that anyone can use them.”

Loral’s straight talk electrifies audiences and inspires powerful action from live stages and television programs ranging from CNN, CNBC, The Street TV, Fox News Channel, Fox Business Channel-America’s Nightly Scoreboard, The Dr. Phil Show and The View. She is a regular guest-host on The Circle in Australia and has been featured in articles in USA Today, The Wall Street Journal, The New York Times, Forbes Magazine and was the breakout star in the film The Secret.
With unquestionable candor, she is quick to speak truth that leaves no doubt about her point of view.

“Get off your lazy assets.”

“You are here to do something better.”

“Change and engage your relationship with money. Start first by hanging out with people who have it.”

“What problem do you solve and what needs do you meet?”

“Say YES and figure out how to get it done.”

Growing up on her family’s farm in Nebraska, Loral was never content to sit at the little kids table for holidays or special occasions – even as a nine year old. The Big Table was where the important conversations were happening, and she quickly took her place – even if it meant sitting on someone’s lap. Today, she and her team call smaller players in money matters to take their seats at The Big Table as the conversations around money shift perspectives and livelihoods for the better.

Loral is living proof that anyone can have the life of his or her dreams through hard work, persistence, and getting things done in the face of opposition. Loral began her career working with the Chevron Corporation right out of college. It was clear to her early on that there was more to life than cubicles and trading her time for dollars. Despite her own fears and persuasion from friends and family against it, Loral quit her job to become an executive coach. Virtually overnight, Loral quintupled her income while working much less. With her newfound freedom of time and accumulation of wealth she founded Live Out Loud, Inc.

As a single mother of two children, she is redefining the possibility for women to have it all and raise their children in an entrepreneurial and financially literate environment. Loral is dedicated to helping men and women from all walks of life to become millionaires and enjoy time with their families.

Legacy is something very important to Loral. She is a frequent donor to charitable groups including The Boys and Girls Club of America, The Lake Tahoe Bear League, An Empowered Woman Foundation, Life School and Family Resource Centers. She has developed special programs for women and children and, in 2012, raised $40,000 for the founder of the Make-A-Wish Foundation. She also runs Serve Out Loud, a program aimed at providing discounted education in financial literacy to United States Veterans.